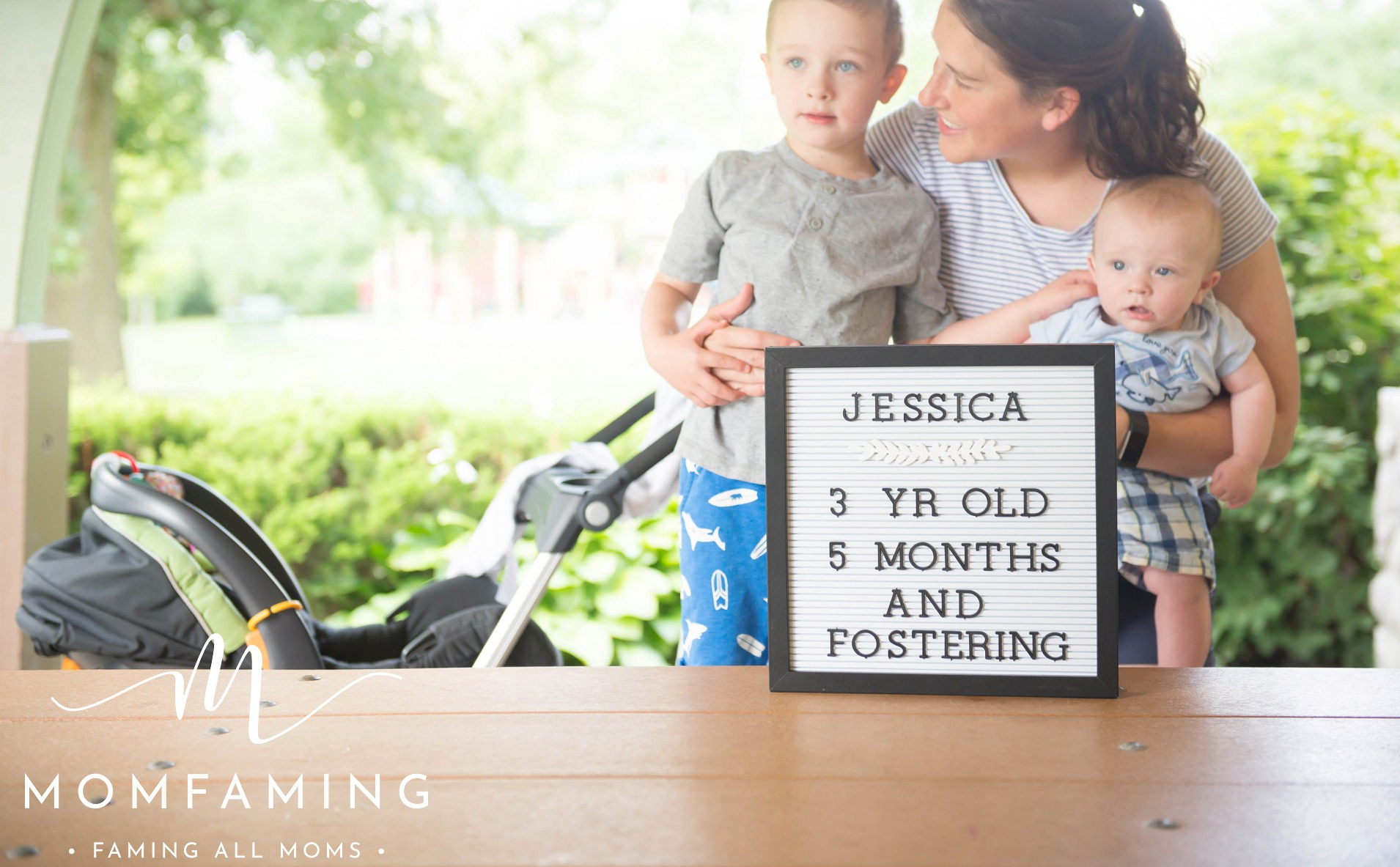 Jessica was very easy to talk to and we had a lot of fun hearing her answers. She talked about being happily surprised by how much she likes being a mom, the funny advice her mom gave her about kids, and all about the fostering process.

We met Jessica and her three wonderful kiddos at a park near their house. We imagine getting all three kids out of the house isn’t an easy task, but they somehow managed to do it and even show up early. While we chatted, her smiley five month old contently sat on her lap and her other two happily played on the playground with dad.

Jessica was very easy to talk to and we had a lot of fun hearing her answers. She talked about being happily surprised by how much she likes being a mom, the funny advice her mom gave her about kids, and all about her experience with the foster care system. She is an amazing person and mom and definitely deserves to be in our Mom of Fame. Welcome, Jessica!

Note from Momfaming – We did take some great photos of Jessica’s sweet foster daughter, but because of certain rules through the foster care system we cannot share them. Please know that she was a part of the interview and as cute as can be.

I was given a lot of advice. I mean, everyone gives you all kinds of advice and I found most of it not very helpful. At all. But my mom always said, “you can have kids and dogs, or you can have nice things”. That’s kind of been my mantra since [having kids]. It’s kind of like, “don’t sweat the small stuff”. Like we were outside, I had mulched everything and I had the blower and [my oldest] was working really hard to figure out how to turn on the blower. He figured it out and just blew all the mulch everywhere. But that’s not as important as he was so excited to get that. I can always re-mulch. Whenever something [like that] happens, “we can have kids and dogs or we can have nice things”.

I try not to give too much advice. So much advice that I was given would have made me a neurotic mother; it would not have worked for me. So I guess the advice I’ve been giving lately is, “everything has it’s seasons”. That kind of makes some of the hard times easier to get through; like those middle of the night things. But also makes those good times just a reminder that it all keeps going. Just enjoy what you can and get frustrated when you’re frustrated.

How is motherhood different than you imagined it would be?

What are your three strengths when it comes to motherhood?

This is the hardest question [laughs].

I think my strengths would be:

1. Creativity and games. I teach, too, so I try to do everything with a little learning to it. Coming up with games that they enjoy to help them learn.

2. I think I’m pretty good at managing chaos. With three under 3 we have a lot of chaos and just trying to get out the door is, “does everybody have what they need?” and not forget anything for a week of daycare. So managing the chaos and doing all of that while they’re running around or screaming.

3. Being flexible and adapatable. Like the other day we were on a walk and it started pouring rain. But that’s fine. Then there was a bird’s nest that had fallen out of the tree so we then stopped in the pouring rain and looked at the bird’s nest. So just letting them be kids. If we got new shoes and we saw a puddle and we stomp in it, that’s okay too. You can have nice things or you can have kids and dogs [laughs].

Describe a time where you were completely overwhelmed as a mother.

There’s always lots of times, there’s lots of little moments. But there’s one that [sticks out] right when we had gotten home from the hospital [with my youngest]. So he was less than a week old and I had had a C-section so I wasn’t moving great and our oldest started throwing up. It ended up being pretty much a nothing episode, but in my mind it was so overwhelming. Like how I couldn’t pick him up to comfort him. Then I was so aware of the fact that that little stomach bug that would be nothing for all of us could be fatal to the baby. Again, it ended up being nothing but in that moment I didn’t know. What if all the kids got it? What if we got it, how would we manage everything? As I’m covered in puke and not able to move because I just had surgery? That was just overwhelming to figure out what we would have done.

Is there anything you feel that you have lost about yourself since becoming a mother? What have you gained?

Just alone time. I’m very introverted so I like my alone time and it’s pretty much gone. Those showers now are a beautiful thing. For now, because no one can quite open the door. But you follow that up with what you gain. There will be plenty of alone time in the future. So I sneak some here and there when I can.

What do you want your child(ren) to learn from you?

I think you always get the standard answer of you want them to be good and kind people. That’s always the most important thing. But you also want them to be confident in figuring out who they are. Confident to pursue what makes them happy and just being comfortable with themselves. My husband always says that he thinks they should also get my stubbornness, just not all of my stubbornness [laughs]. Just to grow up and be content, happy, kind people.

Tell us about your decision to foster. What has been the hardest part? What about the most rewarding part?

So I always thought that was maybe something I wanted to do. But I didn’t know, since I’m such an introvert and I like my alone time, I didn’t know if I would love parenting enough to want to do that. So once we had our first I knew it was definitely something I wanted to do. It just seemed like a piece of good that we could bring into the world. You know, everybody’s gotta find what they can do to better it and that was something we would be good at and something we could do.

Then we wondered when was going to be a good time. Like, would it ever feel like “now is the right time”. Life is never going to slow down is what we thought. Then it took us just a little bit longer to get pregnant then it did the first time so we said, “why not right now?” Life’s not going to get slower, it’s not going to get easier. It was always going to be hard, so we just went for it. We went for the training and we said we wanted to stay in the range of our age of children, so we said anything 0-4. Just about a month and a half after our training ended they called and said they had a 6 month old little girl. It ended up being a pretty easy placement.

After that it’s been challenging. A lot of it is really hard. It doesn’t mean it’s not worth it. There’s so many players in the game. There’s mom’s lawyer, dad’s lawyer, baby’s lawyer, case worker, the court system. With so many players in the game it’s so much work to get all these boxes checked. I just find, personally, as she stays with us longer and longer, since she’s been with us for over a year, it gets harder and harder to do these things. Like, nobody comes to my house to check how I’m parenting my other two children. I know it’s all part of the system and it’s all what we signed up for, but she’s part of our family now. I think the longer they stay with you the harder it gets. You can talk to 100 different people who have fostered 100 different children and every single experience is different. So you can’t be prepared. You gotta be prepared for heartache, you gotta be prepared for heartbreak. Some are easy stories that end up with an adoption quickly or a reunification quickly, but some aren’t.

She is [the most rewarding part], and watching her grow. She was so delayed when we first got her and just watching her catch up just with stability and love and nourishment. Now she’s just part of us.